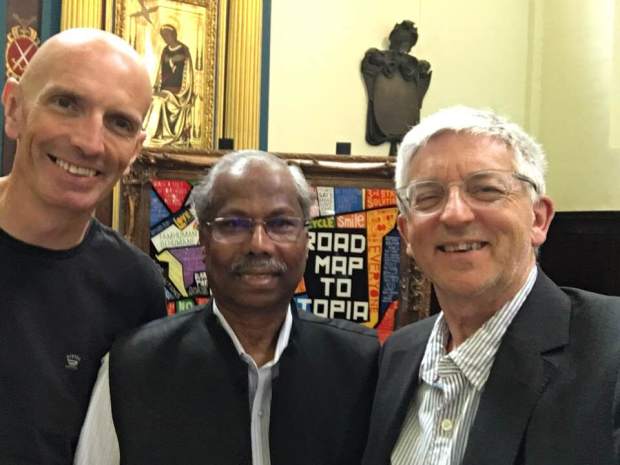 It was a delight to meet Rev Dr Vincent Manoharan, Convener of National Dalit Christian Watch, together with Chris Rose, Director of the Amos Trust, recently.

Dr Manoharan is an Indian human rights activist, who founded the National Campaign on Dalit Human Rights (NCDHR), an organization that focuses on stemming the discrimination still present within India’s caste system.

Dr Manoharan has also challenged the bias against Dalits in the mainstream Christian denominations, arguing,

“that institutional discrimination within the Church mainly happened at three levels: First, among the congregation on matters such as worship, burial rights and marriages; second, in the diocesan administration; and third, in educational institutions.

Citing the CBCI policy document, Fr. Manoharan said that despite Dalits constituting roughly 65 per cent of the Catholic population in the country, only 12 of around 200 Catholic Bishops in India were Dalits, a meagre six per cent. “In Tamil Nadu, there are only two Dalits among 17 Bishops. The gross under representation is at all levels, right from priests,” See here…

When the Indian Prime Minister, Narendra Modi, visited Israel in 2017, Dr Manoharan urged him to acknowledge the plight of the Palestinians, drawing parallels with the treatment of Dalits in India. See here…

Amos Trust supports the Tamarind Project, which champions education as

“the key to empowering the very poorest communities in India – enabling them to claim their rights, escape poverty and realise their potential. alongside local Dalit projects promoting education initiatives, and gives a platform for Dalit human rights activists and Dalit Liberation theologians.”

One of our former Peacemaker trustees, the Revd Michael Lawson, has produced a series of important films on the condition of the Dalits in India with Pipe Village Trust