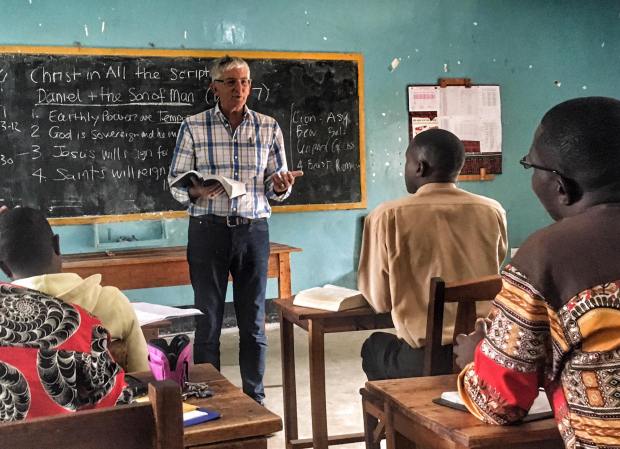 In January, I visited Murgwanza in Kagera Diocese as a member of the Christianity Explored team to help train 130 lay leaders and youth leaders to use the course.  Arising from that visit, Bishop Darlington Bendankeha invited me to return to Murgwanza to teach ordinands undertaking a three-year diploma course for ministry at the Diocesan theological college.

Kagera is situated in north west Tanzania high on a ridge overlooking the borders of Burundi and Rwanda near the shores of Lake Victoria. It is one of the poorest regions of Tanzania. More than half the population live on less that $1 per day. 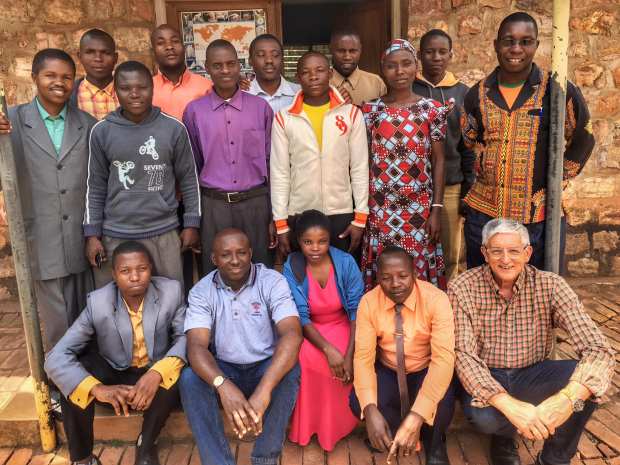 Despite having adequate arable land and plentiful fish in Lake Victoria, as well as access to cross-border trade markets, poverty is pervasive in Kagera. This is exacerbated by constant and heavy influxes of refugees, high levels of illiteracy, HIV Aids and disease epidemics, especially malaria.

In October 1978, Ugandan forces bombed a Lutheran church along the Kagera River killing many Tanzanian Christians. In 1979, Tanzanian forces eventually helped bring the Ugandan civil war to an end. In the 1990’s during the genocide in Rwanda, Kagera Diocese experienced a massive influx of 800,000 Tutsi refugees which tripled the local popularion causing a significant disruption to the socio-economic life of the local community.

A landing strip built for international aid agencies to airlift medical and food supplies in for the refugees is still visible near the Anglican cathedral.

Absalom Vyankende, the Principal of KCTC, asked me to present a week-long course to the ordination students on Messianic types and prophecies in the Old Testament and a short series showing the harmony and continuity between the Old and New Testaments.

The course was taught in English without the need for translation as the students have already undertaken an intensive three-month course of English. The level of interaction during the Q&A after each session was encouraging.

The feedback from both students and faculty was very positive. Absalom, the Principal wrote,  “God intended for good to bring you to us. You have been a blessing to us, useful instrument and faithful servant of God.”

One of the students, Deo, wrote, “Thank you for your teaching, because you uplift me from one step to another especially how Jesus spoke in the Old Testament.”

On the Sunday I was asked to preach at St Andrew’s Church, Mugoma, a rural village some way from Murgwanza. The community is very poor. They made use of a stainless-steel sugar bowl in place of a communion cup.

Many of the parishioners brought produce from their fields to place in the collection instead of money. After the service the congregation gathered in a large circle outside the church where these gifts were auctioned off. Someone bought a small bag of dried beans and gave it to me as a gift, which we ate that night for supper.

The course material was drawn from a sermon series preached at Christ Church, Virginia Water

Christ in All the Scriptures

Malachi and the Lord Jesus (Malachi 2:17-3:5)
Haggai and the Chosen Servant of the Lord (Haggai 2)
Zephaniah and the Name of the Lord Jesus (Zephaniah 3:17)
Micah and Jesus the King (Micah 5:2-4)
Jonah, Jesus and the Whale (Jonah)
Amos: Jesus and David’s Fallen Tent (Amos 9)
Hosea: Jesus the Bridegroom (Hosea 1)
Daniel: Jesus the Son of Man (Daniel 7)
Ezekiel: Jesus the Good Shepherd (Ezekiel 34)
Jeremiah: Jesus and the New Covenant (Jeremiah 31)
Isaiah: Jesus is the Suffering Servant (Isaiah 53)
Psalms: Jesus is Lord of all Creation (Psalm 24)
Psalms: The Cross of Christ (Psalm 22)
Psalms: The Lord of Time and Space (Psalm 8)
Psalms: Jesus, God’s Anointed Son (Psalm 2)
Esther: The Providence of God (Esther 4)
Kings: Solomon, Elijah and Elisha (2 Kings 4)
Samuel: The Son and Lord of David (2 Samuel 9)
David, Goliath and Jesus (1 Samuel 17)
Ruth: Jesus and a Timely Redemption (Ruth 1-4)
Judges and the Angel of the Lord (Judges 6)
Joshua: Joshua and the Commander of the Lord’s Army (Joshua 5)
Deuteronomy: Moses and the Prophet (Deuteronomy 18)
Numbers: The Bronze Serpent (Numbers 21)
Leviticus: The Day of Atonement (Leviticus 16)
Exodus: The Passover Lamb (Exodus 12)
Genesis: The Sacrifice of Isaac (Genesis 22)
Genesis: Abraham, Melchizedek and Jesus (Genesis 14)