In November, Stephen assisted Canon Naim Ateek and Omar Haramy with the Sabeel Witness Visit to Palestine. The theme of the tour was ‘Christian Zionism and Colonialism – A Response from Palestinian Christians’. Stephen gave  three presentations during the week on the historical roots, the theological basis and the political consequences of Christian Zionism. He also gave a biblical refutation called Seven Biblical Answers.

The visit enabled participants experience the reality of life in today’s Holy Land:

Stephen wrote, “I have been to Palestine many times before on pilgrimages and study tours, but the recent Sabeel Witness Visit was the best by far. The itinerary exposed us to the deep pain of the occupation. The testimony of the partners we encountered was truly inspirational. I returned home with a renewed determination to be an advocate with Sabeel for justice and proactive peace-making.” 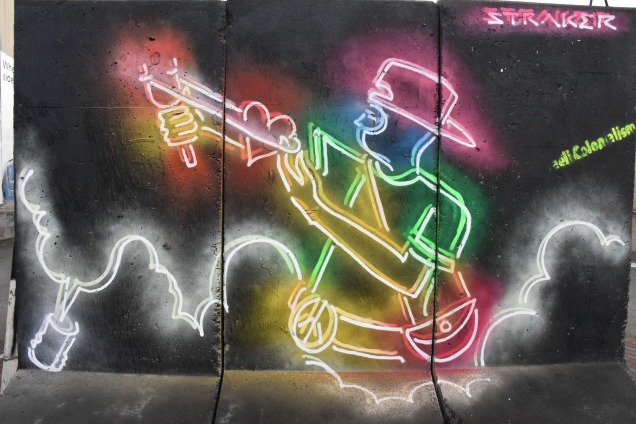 Day 1: Balfour Centenary Events in Jerusalem
In the morning delegates visited the Wall Museum in Bethlehem and the International Christian Embassy in Jerusalem. Participants attended a conference sponsored by the British Council  held at the Hakawati Theatre in Jerusalem. Avi Shlaim gave a paper on the historical context of the Balfour declaration 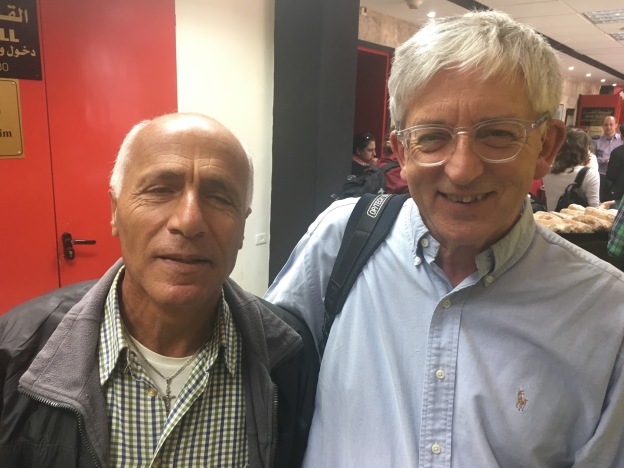 In the evening we attended a  vigil held at St Georges Cathedral with Amos Trust, marking the Balfour Centenary and the British Legacy in Palestine. One of our Peacemaker trustees, Canon Garth Hewitt, sang at the vigil at St Georges. It was a delight to meet Mordechai Vanunu at the Balfour conference. See additional photos here

Day 2: Jerusalem – the Sabeel Contemporary Way of the Cross
The morning involved led a visit to the depopulated Palestinian village of Lifta (now used by Orthodox Jews for ceremonial washing in the natural spring) 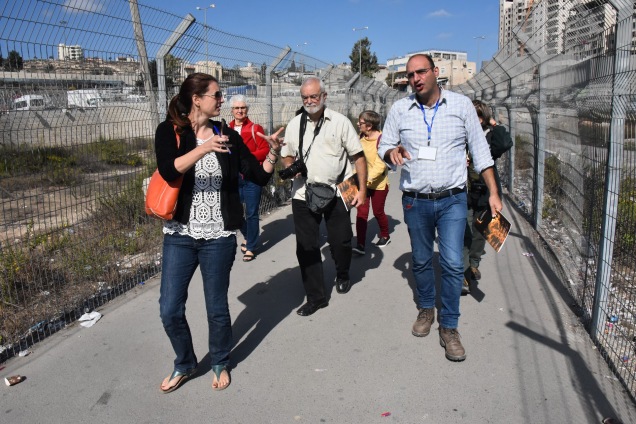 In the afternoon, Jeff Halper of the Israeli Committee Against House Demolitions  gave the group a guided tour of Ma’ale Adumin Settlement and explained the ‘Matrix of Control’ which includes the Separation Wall, Settlements, bi-pass roads, checkpoints, home demolitions and land confiscation. We also saw the Bedouin camp threatened with demolition.See additional photos here

In the afternoon we also visited the Sabeel office to meet Gerard Horton and Salwa Duabis, two human rights lawyers working for Military Court Watch to hear about the treatment of Palestinian children held in Israeli detention.  98% of the Palestinian children arrested live within 1 km of an Israeli Colony. We also visited Notre Dame in Jerusalem for the launch of Canon Naim Ateek’s new book “A Palestinian Theology of Liberation: The Bible, Justice and the Palestine-Israel Conflict”. See additional photos here

Day 3: Hebron and the Aroob Refugee Camp
An emotional visit to Hebron with Christian Peacemaker Teams to see how the Palestinian community endure the presence of radical Jewish settlers, who have taken over the heart of their city, as well as endure military control by the Israeli occupying army.

We also visited families in the Aroob Refugee Camp (and played a game of football). See additional photos here

Day 4: Sunday in Bethlehem
Sunday service at the Lutheran Church in Bethlehem with Revd Munther Isaac and a visit to the Walled Off Hotel . See more photos here.

Day 5: Tent of Nations
We began the day visiting Daoud Nassar and his family to hear the story of Tent of Nations, a Palestinian hill-top farm surrounded by Israeli settlements to the south of Bethlehem.

Day 6: Ofer prison and Ramallah
Ofer prison is where many of Palestinian children are taken for trial. Notice there is no door on the toilet provided for parents.

In Ramallah we visited the tomb of Yasser Arafat and met Jean Zaru one of the founders of Sabeel and Xavier Abu Eid of the State of Palestine Negotiations Team. 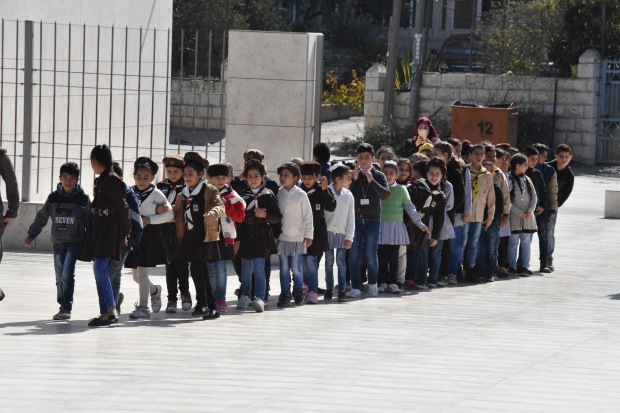 Jonathan Cook on Citizenship from Stephen Sizer on Vimeo.

We also visited  the Roman Catholic and Orthodox churches of the Annunciation and the Mount of Precipice.. 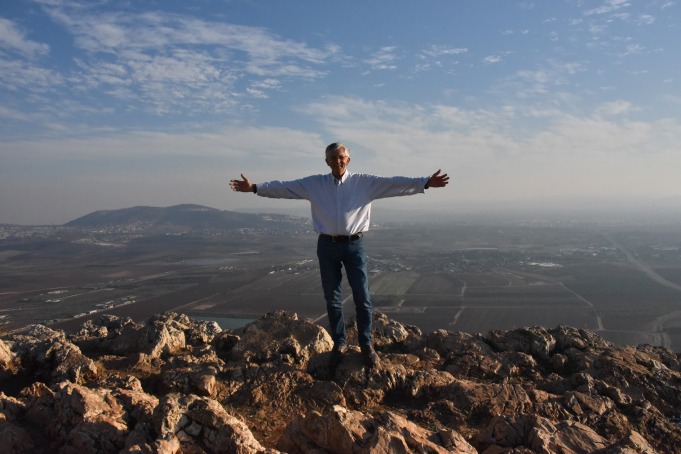 View additional photos of Nazareth and its beautiful churches here.

Day 8: The Syrian Golan
A visit to the Occupied Syrian villages of Ghager and Majdal Shams with Palestinian Christian leaders from the Galilee to show solidarity with the Christian community in the Golan.

Day 8: A Meeting of Druze and Christian leaders in the Golan
A rare meeting took place of Church leaders from the Galilee who visited Druze leaders at Majdal Shams in the Golan to express sympathy and show solidarity following the massacre of 17 people by Daesh terrorists in the other half of the village in Syria.

Druze and Christian leaders meet in the Golan from Stephen Sizer on Vimeo.

Day 9: Bisan and Jericho
A tour of the depopulated Palestinian city of Bisan. We visited Canon Naim Ateek’s family home, now a bank and the Anglican church, now a shop. In Jericho we visited the baptismal site by the Jordan River. View more photos here. 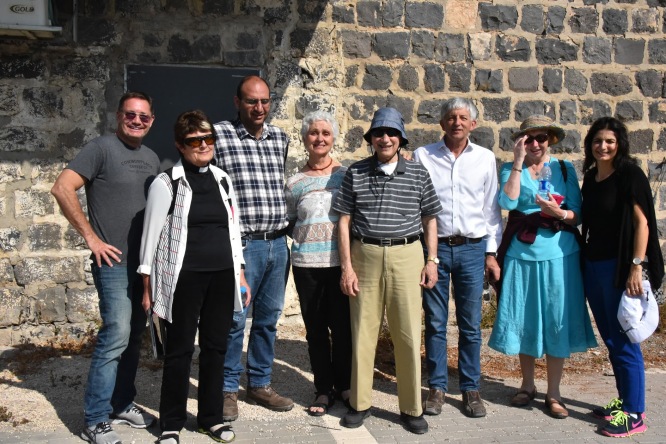 Day 9: Jerusalem by Night
On our return to Jerusalem we took a tour of the Old City of Jerusalem and met with Archbishop Theodosios Atallah Hanna, The Greek Orthodox Patriarchate of Jerusalem. See more photos here. 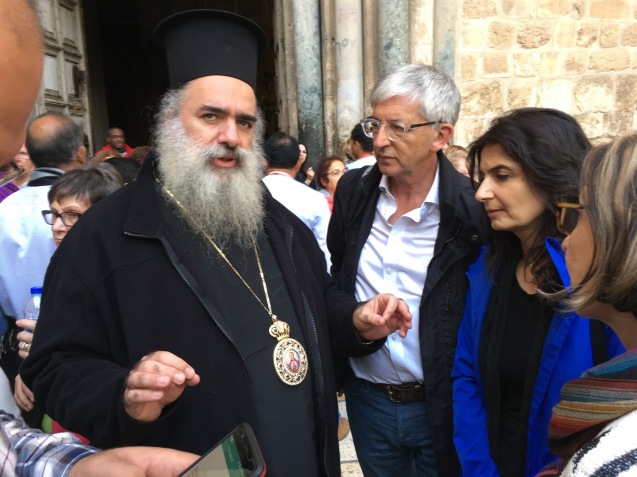 Day 10: Our Last Night in Bethlehem

Sabeel Witness Visits in 2018
Sabeel Witness Visits provide participants with the unique opportunity to experience the reality of Palestinians living under Israeli occupation. This includes, but is not limited to, visiting: the separation wall, illegal settlements, checkpoints, confiscated and demolished homes, and refugee camps. Participants will be able to learn firsthand about the loss of civil and property rights of Arab Israeli citizens, as well as see for themselves the past and present violations of international and humanitarian law.

Participants will have the ability to worship, meet, and reflect with local individuals and families living in the Holy Land. This includes Palestinian Christians and Muslims, Jewish Israelis, and internationals who partner with Sabeel to non-violently resist the illegal occupation.

Each witness visit is unique: themed delegations will have lectures and experiences pertaining to a specific theme, which will amount to about 20 percent of the overall trip content. The primary emphasis of each trip is to explore the social and political realities in the region, which are dynamic and evolve on a daily basis. Delegates will also discuss how the conflict affects Israeli society, and will hear from local Israelis on this subject.

All of this experiential learning is intended to motivate participants to become agents of change when they return home. Therefore, Sabeel also provides materials, support, and mentoring to help returning delegates make connections to their local communities and to share what they have learned while here.

You can find more information on the next Witness Visit on Sabeel’s website.